If you're my naughty child

Folks, I have given up on posting pictures for the time being because the internet here is just too slow and unruly.
Today I went with my cousin Viken to Zmar, an Armenian Catholic monastery in the middle of one of Lebanon's countless mountain chains.  It's exquisitely beautiful.
I sneaked into a building.  It was a Sunday night.  And I found a classroom of pre-pubescent boys with scraggly forebodings of facial hair sitting quietly and studying.
They lived at the monastery, enduring the (rigorous?) education future priests must endure.  Their tameness struck me, the sense of discipline, of withdrawal from the outside world; insularity.
Then it hit me.  I discovered the perfect ultimatum to put before my future child (should he/she exist) if he/she's behavior drives me bonkers.  "If you can't get your act together," I'll say, "then you're off to Zmar."
Swish.
Posted by Raffi Wartanian at 8:27 AM No comments:

This will be the first part in a series of interesting photos I gathered in Beirut. 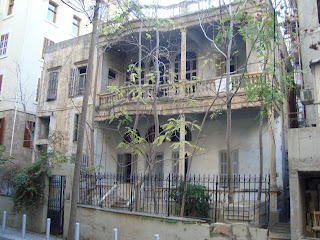 This home belonged to my great grandfather, Mardiros Baloumian.  My grandmother and her seven siblings grew up here.  Today, it is in an unfortunate state of disrepair and is for rent or sale (let me know if you're interested).  It is located in Gemmayze, very close to one of the main night life districts. 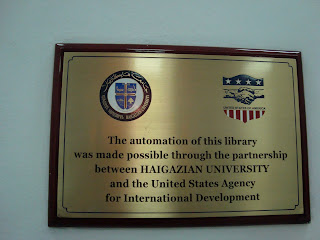 This plague is located at the entrance of Haigazian University's library.  To me it represents the American government's efforts to insert its monetary influence into as many aspects of Middle East society as possible.  The library looks good - very different from another USAID funded academic institution I worked at: a school in the Armenian village of Ptghni in total shambles - shattered windows, no heaters, cracked steps, broken blackboards, unsanitary bathrooms, etc etc - and atop it all, a USAID plague adorned over one of the classrooms in which new desks and a new computer was found. 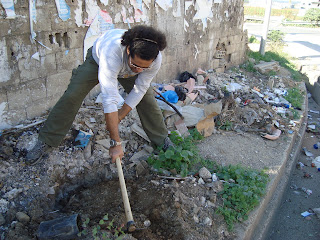 This is Akaar, where the American University of Beirut's Nature Conservation Center for Sustainable Forestry helped fund a group I joined to plant trees near the northern city of Tripoli.  I imagine we would enter lush cedar forests in a sweet mountain shade, but as you can see, the experience itself was quite different.  We mostly planted on the side of a road which most citizens consider viable territory for depositing trash.  Often we found discarded shoes, parts of sweaters, beer bottles, candy wrappers, banana peels, plastic bags, and anything else you might see in the picture filling the holes we planted trees in. 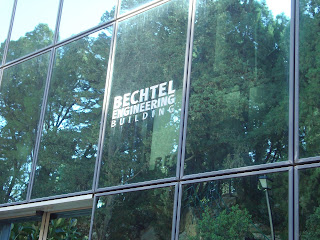 This is the Bechtel Engineering Building on the campus of the American University of Beirut.  That's right.  Bechtel.  To fully appreciate the significance of this, I would highly recommend reading "Confessions of an Economic Hitman".  To summarize, Bechtel is one of several elite American engineering companies that turns immense profits every time the US government scores contracts to develop infrastructure and telecommunications networks in developing countries.  These developing countries take on tremendous debts to afford the work of these American engineering companies whose extremely influential CEO's blur the line between the public and private sector, like Dick Cheney.  I found the toleration of Bechtel's predatory lending philosophy on a university campus in the Middle East highly disturbing. 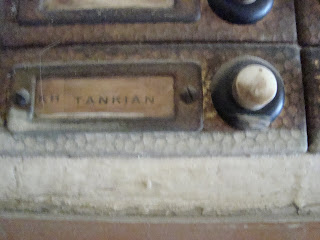 This photo is taken in my grandmother's apartment building in the Geitoui district of Beirut in Achrafieh.  It shows one of the old doorbells that used to belong to a former resident of the building, last name Tankian.  You might recognize the last name, and it is not a coincidence.  Serj Tankian, lead singer of System of a Down, was born in this building, in the garden of the home that was later passed on to my uncle after the Tankians left Beirut.
Posted by Raffi Wartanian at 2:00 AM 1 comment:

Here are two artsy photos I took of Beirut's largest mosque, smack dab in the middle of the city.  Funded and financed by Rafiq Hariri in 2002, the former Prime Minister of Lebanon assassinated in 2005, the mosque was inaugurated in 2008 by his son and heir, Saad.  The former PM is buried beside it.  There is also a very interesting billboard near Hamra, the mixed Christian-Muslim section of the city where Hariri's Lebanese American University and the American University of Beirut are located, that counts the day since Hariri's '05 assassination in bold, red, digital numbers.  I think the count is somewhere near 1357 now.  I feel a bit uncertain of taking a photo of it.  I'm sure I'll muster the courage sooner or later.
I took these photos below on an obscenely-early morning walk with my aunt Aline and cousin Melik.  I like the tree.  It's very tree-like.  Specifically, I like the contrast between the minarets and the branches.  I can't decide if the branches flow into the minarets, or the minarets flow into the branches.  Either way, the mosque is absolutely gorgeous, and the domes are of the purest blues I have ever seen.  The minarets are like rockets poised for takeoff, and the domes seem to link the blue of the sky and the Mediterranean.
It also took me an obscenely long time to load these pics because internet here is silly.  Anyways, enjoy.  More to come. 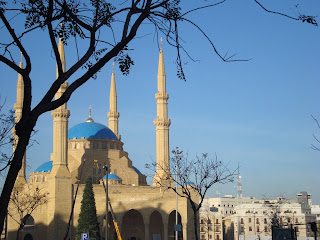 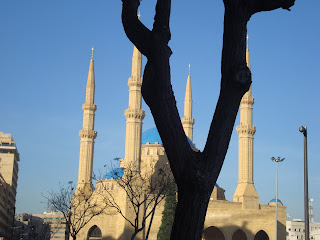 When planting trees in Lebanon

Yesterday I left the city for the first time since November 24th!!  I was feeling suffocated, dizzy, just utterly overurbanized.
Thanks to ISBAR, an environmental group based out of AUB (American University of Beirut), I got to leave the city for the first time with environmentalist-types and plant trees in Akaar, a region in the north near the city of Tripoli.
I anticipated mountainous terrain, goat herds, dogs hooting at their flocks, and working in a forest.  No, we worked on the side of a road in a fairly developed, quasi-urbanized area.
The Absurd:
1. Trees planted in holes that have more roadside trash in them than soil.  Examples of trash include shoes, sweater sleeves, and KitKat wrappers.
2. Child skinning a cow's head.
3. Child skinning sheep in front of butcher's shop.
4. Sheep tied to a pole, standing under fellow flock member's carcasses waiting for its turn under the knife.
5. Riding up and down mountain roads standing on the bumper of an early 80's pick up.  And surviving, somehow. 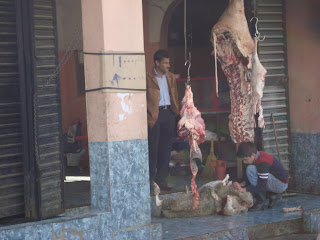 For some reason, our group of tree planters had a lot of overlap with capoeira kids.  What is that?  Are trees somehow involved in the global capoeira conspiracy?  Or are the capoeira maestres of the world scheming to evolve humans into trees?  Time will tell.
Posted by Raffi Wartanian at 11:12 PM 1 comment: