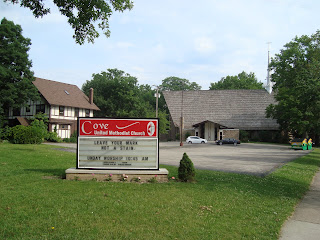 Can somebody please explain this sign to me?
Posted by Raffi Wartanian at 11:23 AM 67 comments:

These photographs and videos from Michigan City, Indiana should speak volumes about this town and our cycling group's experience there. 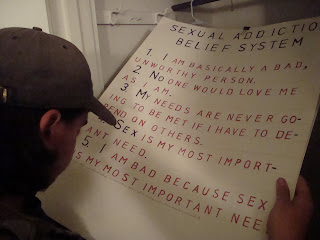 We found this placard in a closet at the rectory of the church that hosted us. Please read it. Toss reason out the window for this one. 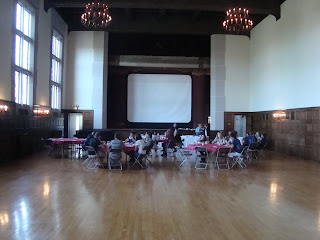 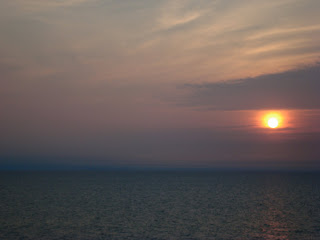 The sun setting over Lake Michigan, Chicago deep in the distance. 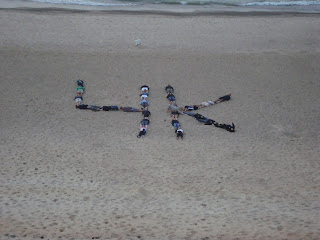 Those are bodies. I'm the green one on the left side of the 4. 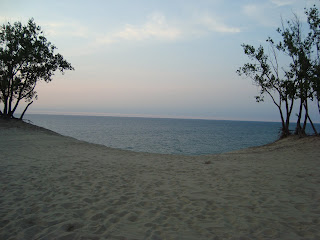 This hill is huge. Look at the tiny people at the bottom. Halfway through the video, the great genius Stephanie decides to run as fast as possible down the hill. Chaos ensues.
Posted by Raffi Wartanian at 10:59 AM 19 comments:

Around the 15th mile I sat at the front of my group signaling the left turn we had to take when I heard a scream. You might have called it a shriek. A yelp of excitement.

I turned around and saw a semi approaching the three girls behind me. And something behind that. Something small. Something running with all of its fury. Its speed was surprising.

"Oh my god oh my god." The girls screamed for me. I heard the semi breaking, that staccato exhale from the engine loud enough to remind you just how easily it could smother your existence with a single bump. 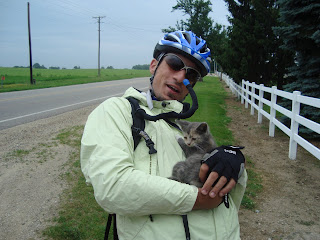 There was a kitty in the road. I biked up to it and it ran towards me, right into my hands. He shook and shook. We just stood there for a while, giving the orphan love. Then we walked it to the nearest home, Dorothy Shepherd's, and handed it off. Diana named it Shipshewanna after the town in Indiana whose name enamored her.

I called Dorothy a few days later to confirm that ol' Shippy now had a happy new home. It's living in a barn, Dorothy told me, with two horses, a mule, and it eats like a hog. "Ol' Shippy's getting fat," Dorothy boasted. 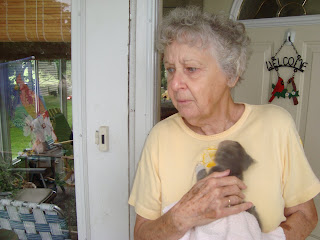 Mile 78 during our 115 mile day into Jacksonville, Illinois. Saw a lot of road kill that day. Turtle stew. Squashed squirrel. Possum brains. Snake innards. Everyday really, but you remember the road kill on days you nearly kill an animal yourself.

We had just left a water stop and passed three flattened ducklings in the middle of the road when Tom out in front spotted the lone surviving baby running for dear life into a field. I don't know why, but we decided it would be a good idea to catch it, dote over it, and eventually enact a rescue. 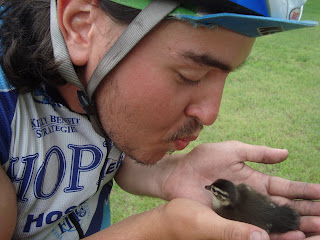 The duckling was shaking, like ol' Shippy. The video below shows the epic capturing of the duckling. We put it in the back of Tom's jersey and transported it to our next water stop where Josephine, the feminine version of a Joey (baby Kangaroos inside of their mama's pouch), was placed inside of a box until animal rescue was called and saved that cute ducky.

This video depicts the rescue of Josephine and the unfortunate fate of his brother and sister.

Posted by Raffi Wartanian at 10:16 AM No comments:

But the day had started like many others in 4k lore. We spent the night at the YMCA of Greensburg, PA, an impressive three story structure complete with a gym, locker rooms, fitness rooms, offices, a childcare center, and an emergency youth shelter. Like many years past, the 4k was given the entire third floor – complete with pool table, Sound of Music VHS, and stunning vistas of downtown Greensburg – to relax and sleep.

The childcare center a floor below invited us for breakfast that morning. Before entering, we dawned our thinking caps knowing that the incisive philosophical ruminations of the toddlers would challenge our assumptions about consciousness. With bananas and cheerios consumed, the discussions began.

4k’er: Why are stickers called stickers?

Philosopher-Child of Greensburg: Because they’re sticky.

4k’er: Why are they sticky?

Philosopher-Child of Greensburg: Because they’re stickers! 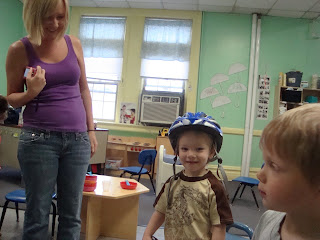 Astounding, I thought. They must have some sticker-related super brain powers. Envious, I put a banana sticker on my forehead before the ride in hopes of boosting my intellectual prowess. And soon I would be put to the test.

, our director with hair far longer than necessary, had recently put me in charge of organizing our snack and lunch foods into separate bins. The driver of the day before, “The First Test Tube Baby In The World” , had scored mountains of ham sandwiches from Wallet’s, an establishment that boasted such customers as Pittsburgh Steelers quarterback . Smell inspections revealed that the sandwiches needed to go. I don’t like to toss food out before trying to give it away, so I took to the streets of Greensburg looking for takers. I waved down a taxi and before I could offer him the meat, he asked for the purpose behind all these spandex-laden people clomping around their town. I told him about the 4k, and he told me about the many cycling treks he had undertaken, including a cross-country ride many years back, and a recent tour around ten countries in Europe. He directed me to his blog which I highly recommend, http://cyclingsimmons.blogspot.com/.

The rain began early that morning and would not relent for a moment. Our route took us around Pittsburgh towards Butler, PA where we found a painful lack of back roads. At one point we accidently found ourselves on an interstate going through a narrow two-lane tunnels. Cars zoomed by as we did our best to avoid getting side-swiped or just plain squished.

Then silence. I looked around and noticed all the cars had vanished. Was it some sort of divine sign? A symbol from above? It was. We saw flashing lights and a man in a neon-orange vest stepped out of an oversized pick-up and told us they had shut down the tunnel to traffic because cyclists are not allowed inside. We threw our road hogs on the back of the truck and were dropped off in town where we adjusted our route and pedaled on.

Like I said, the rain was relentless. We were sopping wet by this point and had hit our final 30 mile stretch for the day on a road infested with angst-ridden drivers in a rush to a place that was clearly important enough for them to justify rolling their windows down to show which of their fingers best expressed how they felt about us.


Fifteen miles away from our destination, the elements had overpowered one of our riders. We pulled into the parking lot of the Two-Bit Tavern and waited under an awning for our support van. As cold as we were, getting off the bicycle only made us colder as our muscles stiffened and energy declined.

While we stood shivering, a woman pulled over and rolled down her window. She had an uncanny resemblance to one of the riders on my team that day, . “Are you ’s mom,” I asked.

“No,” she answered. “But it looks like you guys could use some help.”

We would learn her name was , that she had Multiple Sclerosis, and that she insisted we sit in her heated car to warm up while we waited for the van to arrive. We learned many things about Stef, that this wasn’t the first time she offered to help cyclists caught on the unpleasant roads just outside of Pittsburgh on a rainy day; that she fought the debilitating symptoms of her condition to help others too weak to access their medications alone; that she had an incredibly positive outlook on life; that her nurturing demeanor immediately comforted us from the traumas of an unpleasant day on the road; that her generosity and attitude inspired us more than she can understand. 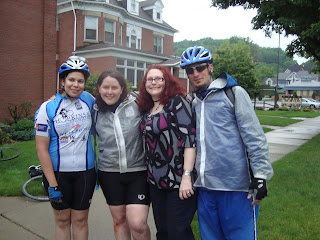 Here we are with Stef after the ride.

I stepped out of the car to run into the tavern’s restroom. The looks I got on my way out clearly indicated that these bar-goers rarely saw cyclists run into their establishment. “Where you going,” one man asked.

He asked me why. I told him about our mission. He collected the money he had put out on the counter and handed it to me. “My wife died of lung cancer two years ago. Remember her.”

The woman next to him turned and spoke. “I lost my father to melanoma.”

These were the words that got our team through the next 15 miles into Butler where the rain fell harder and cold blew more than earlier that day. Stef offered to drive behind us for the remainder of the route with her car hazards on to deter impatient motorists from speeding up to us and laying on their horns. Her generosity and patience with us was inexplicable and affirmed to me that there are still great people in this world. I will remember her fondly as the challenges on this ride grow. 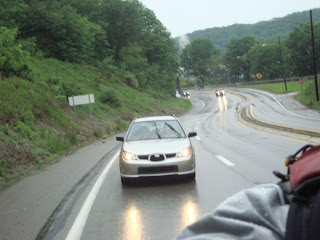 There's Stef in her car blocking traffic for us!

WKYC Coverage of the 4k for Cancer in Cleveland

Riding on the 4k for Cancer a second time was the best possible decision I could have made. A local NBC news affiliate covered our team rolling into Cleveland yesterday. Check out the article below!

College students off and pumping on 4,000-mile bike trip
CLEVELAND -- A group of 27 cyclists rolled into Cleveland Friday night. Four hundred miles down. Only 3,600 miles to go in their trip across America.

The cyclists, ranging in age from 18 to 23 years, will spend the next two months on the road raising money and awareness about cancer.

It's the ninth year for the 4K For Cancer ride which was started by a student at Johns Hopkins University to honor his father who died of cancer.

"It's hard to think of anybody who hasn't been affected (by cancer)," said Raffi Wartanian. "You're constantly meeting people who were affected and they're telling you their story.
"And you put that on your shoulders and use that to get up the mountains and through the rain," said Wartanian, who is partipating in his second 4K For Cancer ride.

Each of the cyclists raised at least $4,000. The group hopes to donate $110,000 dollars to the Hope Lodge in Baltimore and to cancer research.

Two vans carrying sleeping bags, clothes and donated food accompany the cyclists.
The cyclists rely on churches, YMCA's and community centers for food and lodging.
Cyclist Nicole Pangborn, a pre-med student at Johns Hopkins University, has found motivation and inspiration from the people she's met during the trip.

"We rely completely on donations for lunch and lodging and food for dinner," said Pangborn. "It's like we really don't buy anything. And we go across the country.

"A lot of us haven't encountered that type of generosity," said Pangborn. "It's just unbelievable that people give everything to us because we're doing something for the greater good."
© 2009 WKYC-TV 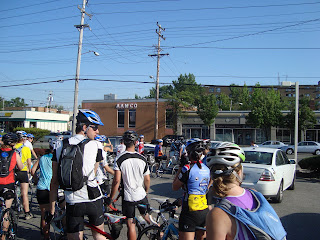 Here's a pic of us getting ready to caravan into the Case campus in Cleveland.
Posted by Raffi Wartanian at 6:53 AM No comments: