Dear Blog,
I'm sorry I haven't given you the attention you deserve as of late.  You have been a truly wonderful friend for the past several months, and you don't deserve the neglect you've received lately.  I have arrived in Beirut safe and sound after the shortest and most turbulent flight of my life - 25 minutes from Larnaca to Beirut.  They served us orange juice boxes that I squeezed the hell out of as our plane blipped up and down, left and right.  Also, I chewed the pin stripes out of the juice box straw.
Now I am living with my grandmother in Beirut, trying to keep my energy high despite her occasionally morose attitude.  A balancing act between celebrating life, and lamenting the passage of time.  And I'm caught somewhere in between.
People here think I look like an Israeli.  That can be a problem.  A big problem.  They say it because I have a lot of hair, wear a straw hat from Portugal, puffy side burns, a goatee, look Middle Eastern, and cannot speak proper Arabic.  Being different can be fun - I always get stares of curiosity and interest from women, and squints of suspicion and exclusion from most men.  Even my hairy friend Jaques says I look suspicious in my hat.  I would say that I look rather innocent - wouldn't you say?? 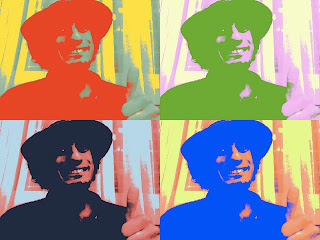 In case you were wondering: yes, I now exist in four, multi-colored dimensions.
I've found that one appreciates people and places far more if they know they cannot easily access them.  We quickly take for granted the things that grow in significance as time passes.  If we increase the distance discrepancy between one's self and places & people of importance, the same effect can be achieved.
Posted by Raffi Wartanian at 7:59 AM

Raff-meister, we missed you at the party in Canada! It was a great family reunion! I will be sending pics soon!

So glad you are with medzmamma! Tell her to hurry up and come back to the states!

Enjoy being you in your straw hat! Keep bloggin'!