The day before leaving Santiago by bus to Corcobion where familia Pootamad and I walked from 11pm-2am to Finisterra and slept on the beach, there was a rather large assemblage of people. In the middle of the grand plaza in front of the Cathedral was a large square roped off with a microphone and speakers. 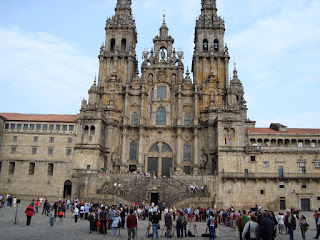 I asked some people in the plaza what was going on, and what I understood was that Anthony Hopkins, the famous actor, was to give a speech. That was weird, I thought. Anthony Hopkins? And of all places, why Santiago? I kept asking, then I got a more reasonable response. It was Stephen Hawking who was to speak, not Anthony Hopkins. I had no understanding why this talk was to take place, but I was there, and joined the crowd. 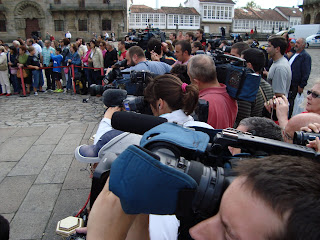 Hawking's procession into the plaza was rather incredible. I tried to capture it on video which I posted below. People were running every which way, surrounding the man, showering him with flash photos, etc. etc. While I do not laugh over Hawking's condition, I do find it a bit comical how people approach him with this tendency to want to shake his hand, to want to take a photo with him, to elicit some kind of response. But this is impossible for him, and is somewhat eery to see how these interplays work themselves out.

Hawking was presented with an award in the plaza, and gave a brief speech of thanks. Video below.

When I returned to Santiago after three days of walking from Finisterra, I saw a big banner advertising a lecture Hawking was to give the next day at Santiago's convention center. I walked 45 minutes to get there (which seems like nothing after 35 days of walking), and sat on the steps in the back to watch his lecture. First he received an award. 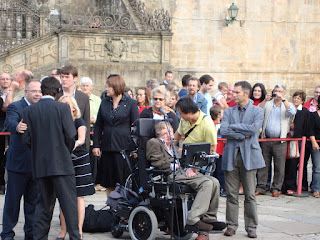 Then he lectured about black holes. I had never seen him before, so it was interesting to observe some of his physical characteristics. He is able to move his eyes and sometimes can lift his chest ever-so-slightly. I learned from Jon Shock, my couchsurfing host who is a string-theory physicist, that Hawking has created a system where he can express ideas by writing out words one letter a time with his eyes. It takes a very long time to have a normal conversation with him, and for most of his public appearances, his speeches and presentations are prepared, and the signals he does make in any given present moment are along the lines of, “next slide.”

Posted by Raffi Wartanian at 10:57 AM