I need your help for a way to end this story. All suggestions and comments are welcome. 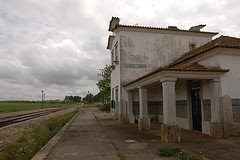 Maltezar Medvitz breathed in the crisp Alentejan morning air. The straw hat he had purchased from a one-leg, one-eyed street vendor in Pinhal Novo shielded his head and part of his eyes from the commanding eight ay em sun. He sat under the station's sing in a blissful solitude, one he had not experienced for years.

He stood up and stretched his legs, bending at the hips one vertebrae at a time, cupping his fingers around his heels. The aloneness only amplified the positive feelings he felt from stretching – feelings often hindered in social settings. Maltezar often interpreted the stares of others as primarily judgemental, always. “Stretching in public,” he reckoned they would ask. “In public? Insanity.”

He returned to a straight stance, lifted his arms up to the sky, and released a deep sigh. He sat down, right by the clock. Not that it was even necessary since only one train ran through the desolate village station every three hours.

“How long has it been since I've been absolutely alone like this,” he asked himself. “Can't even remember.”

It was liberation. Freedom. The destruction of all inhibitions. His first wife, Maria, the village priest's daughter, use to criticize him, saying, “You care so much of how others perceive you to the point that you've forgotten how to exist in a sea of people. You just bob your head about like a finch after five coffees. I could never take you to a city.”

She had a sharp tongue, he recalled, as he stared out into the sky, glad the marriage was over. Her memory was lost among the distant clouds.

Thuds and the sound of a loud, humming motor interrupted the silence, but not Maltezar's serenity. He watched an elephantine mechanic claw jerk around its axis, open, and plunge into a kilmoter long, half a kilmeter high stack of evenly chopped and shaved pinewood. The jaw clamped shut, scooped a collection of pieces, and jerked back around the axis to dump the woods into the open-air train cars. There were many cars, he noted. Maybe six days more worth of work to fill up the rest of the empty cars.

Maltezar enjoyed the claw's company. No need for socializing. No need for banal conversation. It was both exhilerating and soothing to watch the methodic motion of the claw jerk about and control the wood.

Then, a distant click-clack grew more distinct. It was the unmistakable rhythm of high-heeled shoes. Maltezar watched as a ravishing brunette of no more than twenty five years strolled into the station. She breezed past him, occupying the further of the station's two remaining seats. Her apricot-scented hair engulfed him. Neurons fired. Maltezar quickly unstretched his outstretched legs and sat straight.

Fortunately for Maltezar, the young woman sat directly under the station's clock. It provided the perfect pretext to turn his head towards the young woman and steal glances until she turned her head.

She wore comically large sun glasses, he noticed. Her modest jeans gripped tight to her not-so-modest curves. Seeing her exposed belly button, another uncanny international fashion trend like the enormous shades, and her slendor arms, shoulders, and neck wrapped in the finest olive oil skin only made his heart beat faster and breath quicken.

He noticed that she liked to tossle her hair once every two minutes and fifty-eight seconds. Maltezar kept his eyes fixed on the second hand as it droned around, but his attention was no the girl. When she removed her eyes from the cell phone she had incessently been fidgeting and gazed out towards the tracks, which happened to be in Maltezar's direction, he quickly jerked his head around in the same direction, breathing into the deepest confines of his diaphragm to manage the lightning fear struck by the possibility that she may have tried to steral a glance of the village station's only other passenger-to-be.

Maltezar knew his head jerk was too sudden, too obtruse, and might have given away his cover. He needed to convince her that his head-jerk was not so much an act of fear, but an act of courageousness, boldness, of singularity. He rose to his feet, still staring away from the clock, and cupped his right hand over his faux-furrowed brow while cruxing his left hand on his hip. If she knew anything about body language, he thought, then this would sell her.

He could sense her eyes searing into his back. Blanketing him with judgement. In his bold pose, he chose to look back in her direction.

Still, she was staring at her phone, fidgeting with it.

Maltezar clenched his jaw and grinded his incisors. Or was it the mandables? He churned over what he could possibly to break the vast canyon of silence separating him from the girl, a silence only occassionally interrupted by the beep of the robot in her hand. Or her in the robot's hand.

Is that damn phone so much more interesting than I am? He asked himself. It's just a machine, a small silver rectangle with no emotion. It just takes commands, and gives commands. Maybe that's what she wants. Maybe I need to be more like the phone, he conjectured. I cannot just sit here and squander this incredible opportunity to reach out to a stunning girl who might just be the next love of my life. He was determined to speak to her.

Sorry, I don't speak Portugese. Do you speak English?

That's nice, she said, returning to her phone. Maltezar.

His eyes widened when he heard her utter his name. It had never before sounded so serene, so lovely, so strong. Maltezar usually resented his name as a dependable source of embarassment. Something that sounded morel ike that name you might see branded on a popsicle stick or hanging around the neck of a cocker spaniel. 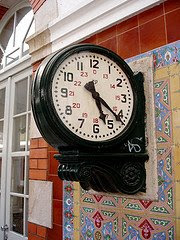 So you do speak English, she continued. Didn't you ask something?

She squinted her eyes at him like she would at a begging dog. Then she looked above her head at the enormous clock.

Were you just looking for an excuse to talk to me?

Well – I neeow that this beeg clock eez abavv yuwer hade. He was buying time. Scanning his mind for a satisfactory excuse. Baht – I theenk maybee yuwer clock sayz deefrant something.

God her tongue was sharp. So much for outphoning the Nokia. She's impenetrable, he told himself. An island. And I am but a pathetic carp idling aimlessly by the shore, hoping to wash up into a world I can't even breathe in. Maybe I am a five-coffee finch.

Posted by Raffi Wartanian at 10:36 AM