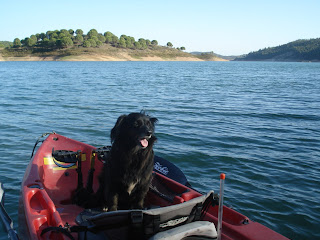 For the first time in my life, I experienced a real companionship with a dog named Lucky (may he rest in peace) at the farm in Portugal. Lucky got his name because of how his owners discovered him: a trashcan was opened, and inside were four puppies of the same litter. Only one was alive. Hence, Lucky.
Lucky had an incredible nature and a fascinating energy, and our friendship was all the more special for me because I used to be afraid of dogs until my mid-teenage years. Having fun with dogs, I think, is a special part of a childhood. It is the wonder of interacting with other living beings on this earth that can spark amazing ideas and questions. What are these dogs thinking? Can they communicate with each other? Who's really in charge of whom? Why does he keep chasing his tail?
Almost everyday after work, I would go down to the lake by the farm and go on a canoe ride to the damn and back. It took about 45 minutes total, probably a distance of 2 km one way (my estimate). It turned out that Lucky loved all sorts of transportation, so he always occupied the vacant front seat of the canoe, and I had a companion for these canoe rides. He always smiled as the fresh wind blew into his eyes and tossed his hair back. He was very light, so riding with him was no problem. 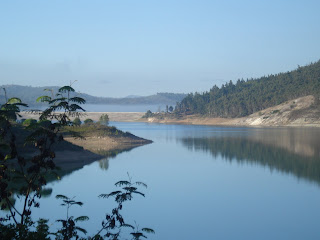 This is a picture of the lake in the morning at the Quinta. It is one of the largest man-made lake's in Europe. If you look carefully, you will notice some dirt showing below the treeline before the water. This is because of a drop in the water level.

One day I was playing harmonica outside of my room in Venda Velha, a small village near the farm. To my surprise, Lucky came over and began singing an incredible arrangement of canine gregorian chants.


Lucky was also the alpha dog among the farm's three dogs, Molly, Sideways, and Peshca. I had never before witnessed how dogs express their social hierarchies, but Lucky's demonstrations were absolutely hilarious, albeit at times annoying. But hey, at the end of the day you had to laugh beacuse Lucky was three times smaller than the rest of the dogs, yet still was number one. For example, if Lucky spotted any of the dogs peeing somewhere, he immediately ran over to this area, and peed on the pee. Pee, in the dog world, means marking territory, and Lucky, like a paranoid and scrupulous dictator, went about constantly asserting his authority with pee. If Lucky spotted Molly and Sideways playing with each other, he would immediately run over and girate all over Sideways. Usually I did not like to turn the garden hoses on and off alone for fear of a scorpian or snake encounter, so I usually colled Molly or Peshca to come along with me since they were young and eager to prove themselves. If, however, Lucky was in the near vicinity, he would run over, and begin growling and aggressively staring at Molly or Peshca if they tried coming close to me. Then I would walk off, and Lucky would trot along beside me, constantly looking over his shoulder to make sure the others did not make a move. Then, when we got to the hose, Lucky scampered off, more enthused about consolidating his power than joining me in hose maintenance. 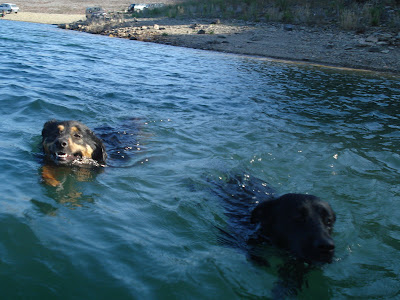 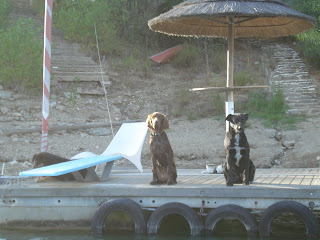 On the left is a photo of Molly and Sideways who followed Lucky and I as we rowed across and back the lake. Those dogs must have swam at least 2 km. On the right, Peshca and Sideways sit on the pontoon watching Lucky and I canoe into the horizon.
Despite his paranoid leadership, Lucky was a great friend. One day, while riding on the lake, a song sprung into my mind and I began singing aloud to Lucky. This song is my tribute to Lucky:
Got the foothills of the mountains looking over our sholders,
Lukcy dog baby it's me and you.
Ya got a little tiny body and a big bright smile,
The world is your bone and you don't even chew it.
Sideways, Molly huffin' puffin' swimmin' right after you,
Ridin' mighty high on the Hobie red canoe.
You're the sageling of the Quinta and you don't even know it,
You're the Tao Te Ching of the animal kingdom.
The son of great fortune and the brother of longevity,
Betcha gonna have a nice, long life (I was wrong about that one).
Weavin' through the gardens like it's the back of your paw,
Showin' me the way through this mazey quazi-jungle.
Reluctant to swim, but you pee so readily,
You cross the wrong line and you'll get it someday.
Think you're so tough you could take on a lion,
But you know he'd take you out with half of a sneeze.
But you'll always be a friend at the end of the day,
Think you're really special in a doggy woggy way.
I received a very sad email the day after I left the ranch in Portugal from Mel, the other volunteer from Australia. Lucky died. He was struck by Frank's car during the morning ritual where the dogs are let out of the van about 750meters away from the ranch, and run alongside, in front of, and behind the vehicle all the way to the destination. Sounds dangerous? I thought it was the first time I saw it, but the dogs seemed very accustomed to it for they had, presumably, been doing it for years.
To imagine Lucky's death, simply imagine this comic process gone terribly wrong. Anyways, seeing Lucky's small body running alongside the big van always makes me laugh, and if you notice, all the dogs seem to be smiling and quite happy. For dogs, these four, now three, have a great life full of the sorts of freedoms and luxuries (daily swimming, canoe rides, loving masters, great food) that most dogs would envy.
Posted by Raffi Wartanian at 8:53 AM